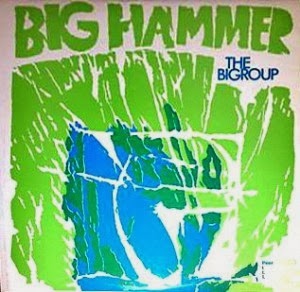 More from the CD-R revisit project... Moving away from the US bands for the time being.

In today's culture, one might presume the Bigroup to be some sort of avant garde transsexual troupe. But most likely in 1971, it stood for nothing more than "The Big Group". Then again, they do have a composition entitled 'Blow-Suck Blues', so perhaps they were ahead of their time after all? Musically, however, they sound more like a late 60s group than a pioneering cutting edge post-Swinging London progressive band from 1971. "Big Hammer" is, in effect - if not actually the case - an all instrumental film library psychedelic album with copious flute, sitar, surf guitar, and roller rink organ. There's not much in the way of compositional development, which would be typical of the incidental film music genre. Somewhat similar to the Italian groups like Blue Phantom, Psycheground Group, or Fourth Sensation. Fun stuff.

Priority: 3
Posted by Purple Peak Records at 7:42 AM