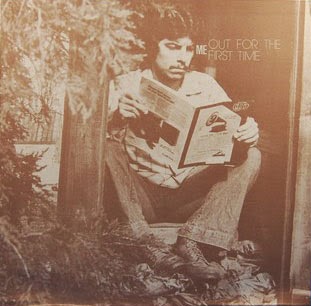 Certainly one of the most odd albums coming from 1970s Weird America. Not so much musically, but more the premise of a loner woodsman from New Jersey (New Jersey?) with a self-deprecating disposition. Marolda now resides in Lost Wages, which seems to be an apt destination for this man with a creative and restless mind.

I was first introduced to this album by our Gnosis friend Lev who described it as such on RYM: "This looks like an outsider folk private press, and a pretty typical Acid Archives fare, but in fact it's so much more than that. Google tells me that Me's mastermind later gained some fame in the band called The Toms (which I haven't heard), and I can easily believe it, given how challenging and musically advanced was his very first, privately released production. "Out for the First Time" is essentially a symphonic prog record, with nods to all the usual suspects such as Yes and Genesis, but also more complex instrumental workouts recalling Zappa and Gentle Giant. Out of the US prog bands of the 1970s, I'd say it would be best compared to OHO. Quite a nice find!"

And a few months ago, The AC lobbed a copy over to me and attached the following description: "This album was the earliest musical project of New Jerseyan Tom Marolda, who later went on to produce a number of more pop-oriented records. It's generally seen as a solo effort, but there were actually a number of other musicians involved, rotating in and out on a track by track basis. The highlights are definitely the two lengthy side-opening pieces, both of which are excellent complex progressive rock, featuring notable Yes and Gentle Giant influences, as well as a quirky Zappa-esque sense of humor. Imagine a more laid-back, less explosively virtuosic Yezda Urfa and you're getting pretty close to what this sounds like at its best. The problem is that several of the other remaining tracks are infused with heavy elements of folksy singer-songwriter, old-timey Americana and even some country stylings, which really brings it down a few notches. Also, the production is quite sparse and boxy, although I suppose that's to be expected from such a low-budget, homemade recording. Still, it's a very interesting effort overall, which should certainly be more well known. The album has now been reissued on CD-R by the artist himself. It's fully remastered (which definitely helps to fill out the sound a bit) and comes in a hard case with a replica of the original LP covers. You can contact him via Marolda's own website to find out how to order."

Well, not sure I can add much more than these consistently insightful gentlemen have. The progressive tracks most certainly do recall Gentle Giant and Yes - and sure, there are a couple of places you might think he was emulating The Rockford Files theme song. Yea.... it's Weird America. And worthy of a real CD (not CD-R) with perhaps some more progressive oriented bonus tracks that are no doubt stored in the woodshed somewhere in Mad Men land.