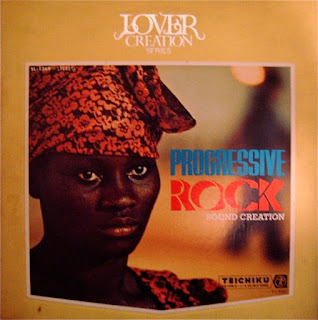 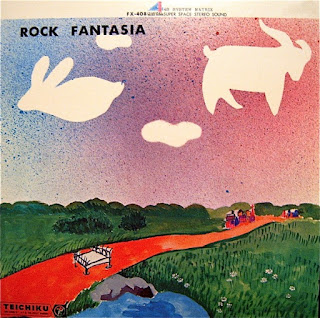 Lots to talk about here. I'm moving this post forward from December 14, 2014 as we've now heard  both of the albums in full. Both of these were in the batch from the AC's latest exploration. In a nutshell, the misnamed "Progressive Rock" album is not very worthwhile, but Rock Fantasia ended up being a full album worth hearing. Another bizarre occurrence here is that CDRWL friend Julian Ryan featured this album on his blog just two days ago, unbeknownst to us, and I encourage you to visit, as he has the killer cut (mentioned below) readily available on his site. I'm going to start with our original notes on Dec. 14 and then please scroll down to see the new notes.

I've been sitting on "Rock Fantasia" for awhile. This came via a tip from Laser Ken a couple of months ago. I've only heard one side of the album, but it's really quite an amazing side! We've been talking about the early 70s Japanese underground for a few years now on the CDRWL. It's amazing to me just how many treasures there are to be found over there - and they are all ridiculously obscure. In the last few years, we've seen CD reissues of these gems - always limited and expensive. But they've been worth the time, money, and effort for me at least. Perhaps this will be another title we will see? I hope so...

Here is the description that came from the dealer that was selling this (and where I got the sound clip, which is no longer available.... however for the clever amongst you, do a Google search and use the cache feature...).

"The monster Japanese progressive psych LP...!!!! Same series of "S.Tanaka - British Rock Live" LP by Teichiku label. Pink Floyd type progressive rock music. The arranger is Yusuke Hoguchi! He is the leader of People - Ceremony"Buddha meet rock"!! Sound Creation is a secret band. All band member's names are hidden. The inside of the sleeve has liner notes. Even the reviewer of the liner notes does not know it. However, I think the band is same of "Buddha meet rock."...! Because the arranger is Yusuke Hoguchi... If it is right, the guitarist is Kimio Mizutani!!!! This LP is really rare, so Pokora's book does not list this LP yet."

Well there you have it. When he says "Pink Floyd type progressive rock music", he means Ummagumma era. This is the good stuff. Space rock with a psychedelic freakout backdrop provided by no less than the legendary resident freakmeister himself: Kimio Mizutani.

Priority: 1 or 2 (if it's like the track I heard, we'll go Priority 1... but for all I know Side 2 is a choral piece, or children's music, or God knows what. The Japanese albums from this period are crazy like that. Even if that's the case, it's worth a CD for the one side which is over 20 minutes long).

The AC has also chimed in regarding this band with his usual expertise on the Japanese scene: "As you suspected, it was your typical exploitation studio project that was so common at the time in Japan. It was indeed another Yusuke Hoguchi-led session (People, Mannheim Rock Ensemble, etc.), and was actually the second Sound Creation LP. The first one was also released on Teichiku (in '71) and was called (wait for it...) "Progressive Rock"! (scan attached). Anyway, both of these were basically covers/arrangement albums, but given the psychedelic "New Rock" makeover. As you might expect, the side that the dealer featured is the more interesting of the two. And both LPs, while they have their moments, are rather patchy. Other LPs of this ilk that are still not too well-known include the aforementioned "British Rock Live in Japan", a couple of the "Warner Beatniks" LPs featuring Kimio Mizutani and even one or two of the later, lesser-known Love Live Life records. Again, most of this stuff is fun but inconsistent, and not always as shockingly rare/expensive in Japan as certain dealers catering to western collectors make them out to be."

Let's move straight to the AC's dig notes: "Sound Creation was yet another name for Yusuke Hoguchi's group of studio gunslingers who recorded so many of these sessions back in the early 70s New Rock heyday, in this case for Teichiku. They also appeared on a number of other exploitation/covers LPs during that timeframe, and if I recall correctly a later version of the group also existed that cut a few cheesy direct-to-disc jazz-funk EPs. But the albums they're best remembered for (if they're remembered at all) are these two rarities. The first, "Progressive Rock", sports an eye-catching (but completely non sequitur) "African woman" cover and was released in the same "Lover Creation" series that the infamous People "Buddha Meet Rock" album was, complete with an identical yellow textured fabric sleeve (there were other releases in this series, but like most of these things back then, there was really no consistency or logical connection between any of them). It comes with an insert, which oddly rambles on about the New Rock explosion that was taking Japan by storm, focusing particularly on the influence of (you guessed it) progressive rock on this "happening scene". Yeah, man! But if you flip it over, you'll notice that the album consists of nothing but instrumental covers of then-recent pop/rock hits, like most of these albums tended to. Uh oh... But wait, all is not lost! Because the group at least tried to psych-up some of these standards, so a few are transformed into slowly creeping late-nighters echoing off into space, and a couple get the more energetic treatment, with groovy organ and ripping Mizutani fuzz leads. However, that can't save around half of it from being pretty mundane. It's quite fun for a spin or two, but not really worth what it might cost you to track down, and really has very little to do with its musical namesake. Amusingly, Teichiku also released another Sound Creation LP right around the same time called "Trip To Beautiful Rock World - Mamy Blue" (don't get me started on the bizarre "Mamy Blue" fixation that these Japanese exploitation records had...) that has the exact same track list (just in a different order) but dropped the prog/psych pretense entirely and let the cheese flow free. Unsurprisingly, that one is much cheaper and easier to find today (cover pic included, just for fun).

Fast forward just a couple of months (they knocked these suckers out fast back then!), and Sound Creation were back in the studio, probably with more vague instructions to do another quick and easy cover songs cash-in, but it seems like the guys were on a bit too much acid at this point, so instead they decided to take the list of songs they were given and work them into some kind of semi-conceptual psychedelic/space-rock opus. Released as one of those 4 channel discs, opening up the gatefold will reveal a truly bizarre set of Japanese liner notes, giving you some clue that things had taken a turn for the weird. They ramble on about hallucinatory visions, surrealist French poetry, Walt Disney (I guess the "stoners love Fantasia!" thing was going on in Japan too) and most importantly, the influence of Pink Floyd. But what this all translates into musically is quite interesting indeed. You'll hear fleeting bits and pieces of the tunes they're supposed to be covering (most amusingly when the iconic "Theme From Shaft" is transformed into a thunderous psych-funk/space-rock jam), but for the most part they decided to drift off on their own and lay down the prime-era Floydian space psych nice and thick. It can be a bit slow going at times (as Floyd themselves often were, in all honesty), but it's good stuff. However, the jackpot is really hit around halfway through side 2, as the deep end is reached and left behind in chilling fashion. The moment where a crystal clear rendition of the main theme from "Sweet Caroline" (backed by disturbing dissonant noises) emerges briefly from a pool of abstract synths and noise guitar, only to be swallowed by a sinister space-rock march into a pounding krautrockian "end of the universe" freakout is truly hair-raising, and elevates this album into a must-listen experience."

And so we now have the full story. The first album "Progressive Rock" is a pretty mundane set of covers, though anything with Kimio Mizutani (the busiest man in Japan?) is bound to bring a wry smile to any self-proclaimed psychedelic fan. Meanwhile I think we were all scared to hear the "other side" of Rock Fantasia, but it turned out fine as both the AC and JR noted. Personally, I find the highlight to be the end of Side 1, that climaxes into a wonderful Ash Ra Tempel / Pink Floyd thundering jam. But the whole album is excellent.

Priority: 2 (for Rock Fantasia only. "Progressive Rock" would make a nice set of bonus tracks)
Posted by Purple Peak Records at 8:16 AM