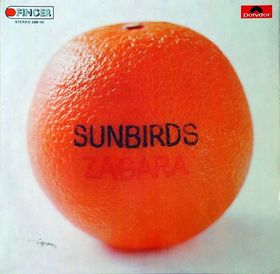 We've talked about this a couple of times in the last few years, and now the CD from GoD has been officially released! Includes one bonus track as well. Great news for fans of "Kraut jazz fusion". This is a very worthy album, and I'll buy one as soon as possible. Thanks to reader Gal for the heads up!

Label says: "Fusion from Munich, some smoothly relaxed kind of music with Latin influences. After the first Sunbirds LP from 1971, with Philip Catherine on guitar, the album at hand is the band's second and last one, recorded in 1972 and released in 1973 (Finger 2396101). It is the first CD version, drawn from the master tapes, including the bonus track 'Mbira' which was then recorded during the same session. All of the musicians were masters of their trade. Drummer Klaus Weiss, keyboardist Fritz Pauer and bassists Jimmy Woode and Ron Carter were world-famous even back then, and the others were in no way inferior. The nine artists were so skilled that nearly all recordings were perfect at the first attempt. Unfortunately, the two studio albums should remain the band's only releases. There weren't any Sunbirds gigs for lack of time."
Posted by Purple Peak Records at 1:08 PM