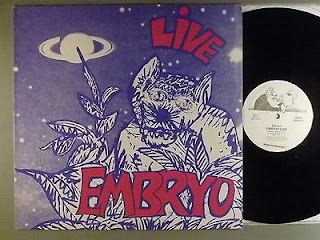 While we had been anticipating the Sunbirds reissue, Garden of Delights did manage to sneak this one in on us. It's been on their Coming Soon list for many years, but we had no indication of an imminent reissue. This CD is most welcome, and I believe this represents the last Embryo "proper" LP to be reissued on CD. Of course, they have tons of archived live material that remains in the vaults, and GoD has promised us at least one of those from their late 70s' jazz funk fusion heyday. Note that there's a lengthy bonus track as well!

Label says: "Neatly recorded in February 1976, it was released on LP in 1977 (April 0003), but has not yet appeared as CD. The gig had taken place in a town near Munich. The album features the jazz-rock typical of Embryo, influenced by ethnic music, with scarce vocals and some unusual instruments like marimba, dilruba, oud, and nagasuram. Christian Burchard and Roman Bunka wrote most of the songs together. Only 'The orange man' was written by Charlie Mariano. The long CD bonus track 'Just arrived' was recorded in Northern Italy on March 6th, 1976, by the very same Embryo line-up and was as yet unreleased. The cover was then designed by Roman Bunka and was used for the CD without any changes."
Posted by Purple Peak Records at 1:15 PM