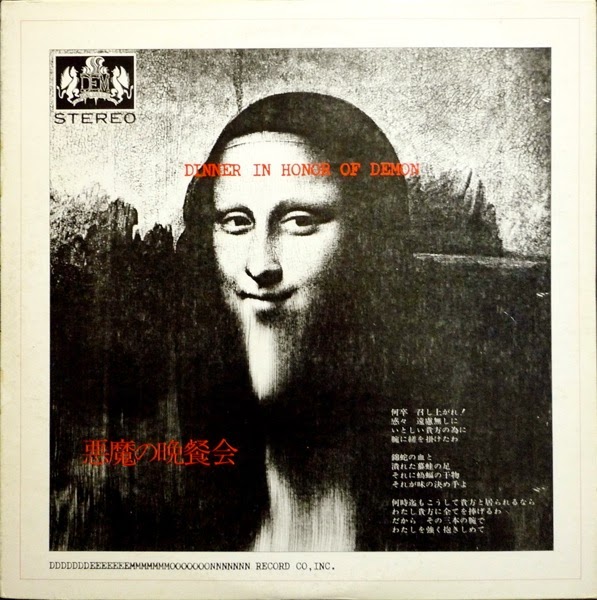 Akuma No Bansankai - Dinner in Honor of Demon. 1976 Demon Record

Well, then, what a place to start on the dig, eh? Look at that cover. And that title. Oh my, we're a long way from the Japanese progressive rock I grew up with (Fable on the Seven Pillows anyone?). I think digging something like this out of the ground must come with some sort of curse or somethin'. And thus said the Elder "He who shall uncover Dinner in Honor of Demon shall spend eternity with album cover on thy mind". Alright, let's check in on what the AC's notes were while he was excavating this one: "Private press psychedelic/folk-rock anachronism from a group of Hiroshima high school kids that generally sounds more late 60s than mid 70s. The album starts strong with some cool amateur guitar psych, loaded with effects, ancient sounding organ and possessing a decidedly trippy vibe. It's a lengthy album however, and kind of gets bogged down in more standard acoustic guitar/piano driven folk-rock much of the time. Would probably go down well with the private psych/folk collector crowd. Like a number of these obscure amateur/student group private presses from Japan, it's actually a very well-produced album, with cool cover art and a nice booklet."

Hard to argue with his initial findings. It's a bizarre album, that moves seamlessly amongst many styles. Each side's opening with variations of [standard 1940s Asian theme] is a bit silly, but some of the lounge bits offset by fuzz guitar were very interesting. At times the album is brilliant, with crazy effects and crazier ideas all coming at you randomly and seemingly out of place. While at others, the fast-forward button begins to look appealing (especially on Side 2). One can even hear a proto Pizzicato Five here. Honestly, the album seems more influenced by 1967-68 era Beatles than anything else. So yes, as the AC notes, one could see this going down a storm with the well heeled collector set who already have everything else, but for the rest of us, it remains merely an interesting curio. Perhaps it would serve well as a featured item in a small town museum.

BTW - you will not see the name Akuma No Bansankai anywhere on the internet, but since the AC speaks fluent Japanese, he was able to decipher the cuneiform tablets for us.

In doing further homework on this title, I came across this sale item, for the super cheap price of $820 (the dollar isn't that strong yet): "A Divine Treasure in my home town Hiroshima.
Superb Fuzz Psych Prog Rock Teens from Hiroshima High School.
Include a member Young Genius Yoshihiro Kunimoto who
later became arranger for Jun Togawa, Denki Groove.

Such fame were Teenager Underground Scene in Tokyo.
Miki (Young Char involved), Rotten Peach etc.
This album from Hiroshima. However, this album had
a young genius keyboard player Yoshihiro Kunimoto.
And he managed and made this splendid album.
If they released a thousand copies and many collectors could hear,
this would be in the top ten of Japanese Psych album.
Gee but Pressed only less than 100 copies.Cool Mystic Mona Lisa Art Cover.
Recorded at Demon Record Studio 29th March to 5th May 1976.
They were high school students 17old in those days.
(They were from Hiroshima Kokutaiji High School which
lots football players are graduated.)
Cool Atmosphere in the Whole This Album.
Great Fuzz Psych, Key Prog, Technical Guitar Jam, Tricky Ideas,
Competent Guitar Plays, Outstanding Lunacy Effects etc etc
Also includes Mystic Prog Folky which in Rural Psych Style,
Basement Heavy Psych Hard Rock ala Blues Creation's Druggy Blues Rock,
Also include Day Dream Folky tune in Half Doze "Happy End" Style
with Hypnotic Lyrics. Outstanding Psych Prog Album Totally.

Priority: none
Posted by Purple Peak Records at 7:18 AM

Labels: Akuma No Bansankai, Priority none