New Discoveries are Upon Us 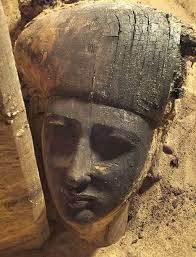 Like the archaeologists who toil away in the Egyptian desert, we too have discovered new and mysterious faces - in the form of rare music yet unheard or unseen by the masses. That most famous of music scientists, The AC, has returned with perhaps his biggest haul yet of unknowns. I took a sneak peak at the stack, and I will just say it is impressive (Including at least one album I never thought I'd hear in my lifetime). Especially after all this time has passed. How does he do it? We'll never know - it is his trade secret.

As well, I've been sitting on a couple of my own LP purchases (similar to Datura and Iliad in that way), and we've heard from old friends like Heavyrock as well in recent weeks. And we have a new friend that we've known for awhile, but has also made some suggestions that require our own personal dig. If that's not enough - the CD-R revisit project will remain on track, and more common albums like Tripsichord, El Tarro de Mostaza, Finchley Boys - to name the most recent activity - will be uncovered as not having legit reissues - a tragedy in of itself.

I don't anticipate going back to daily postings, but I think you will see more activity in the short term as we work through these aural scrolls discovered by the master himself. We are talking back to the Ginga Rale Band and Metaphysical Animation days of yore. I have no idea of the quality of these albums. I know it will be a mix of the good, the decent, and the bad, but as journalists we must discover the truth.

With any luck at all, we should have a new posting ready by Thursday or later in the week.
Posted by Purple Peak Records at 5:03 PM