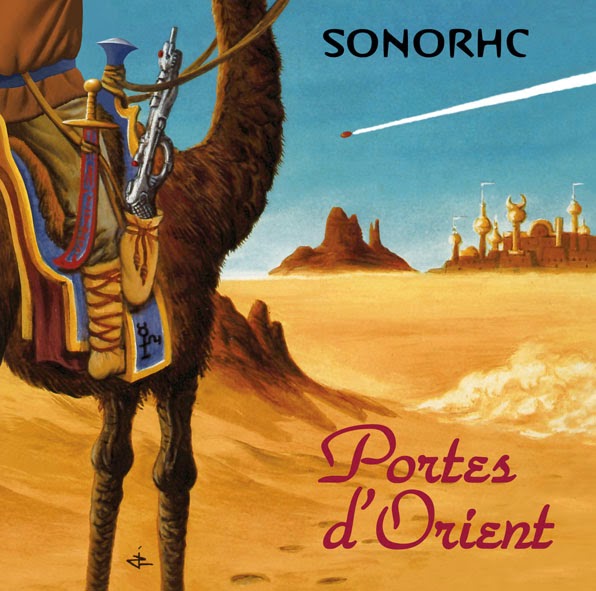 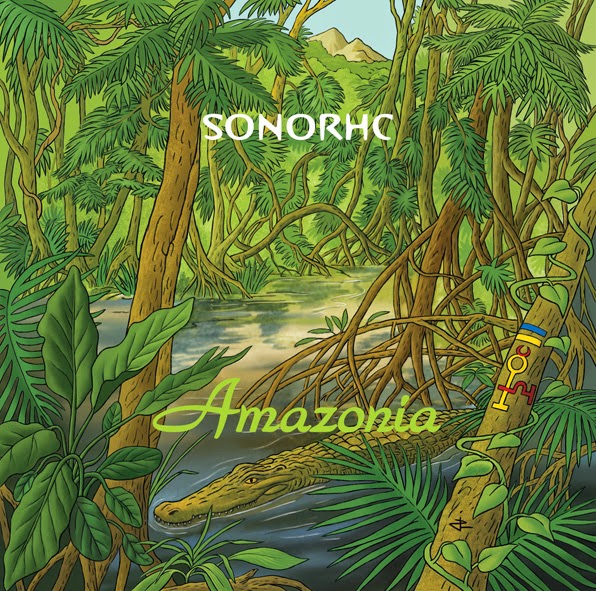 Thanks to reader Gal, we learned this morning of this imminent CD reissue that is due on April 27. Amazonia is an archival album, released here for the first time. Both of these albums will be presented on one CD.

As a band who claim to be « without leader », Sonorhc is a collective with variable line-up as shows this reissue : four musicians (Youval Micenmacher, Laurent Cokelaere, Pierre Buffenoir, Jean-François Gaël) on « Portes d’Orient » and only two for « Amazonia » despite this one could be saw as almost entirely composed by Jean-François Gaël alone, inevitably one the of major force in their ranks. Jean-François Gaël is born in Paris in 1938. He worked as guitarist, composer or arranger with : Hélène Martin, Francesca Solleville, Marc Ogeret, Marcel Mouloudji, Jean Ferrat, Colette Magny, Catherine Sauvage, Henri Gougaud, Antoine Tomé, Mama Béa and with poets : Jacques Prévert, Louis Aragon, Eugène Guillevic, René Char, Pierre Seghers... Theses collaborations will find success five times for the «Grand Prix du Disque de l’Académie Charles Cros» award. He worked at the GRM in 1965, at the GMEB in Bourges in 1985 and at the IRCAM in 1995. He now composed film soundtrack for cinema and TV in his own studio.

So, here is finally reissued and for the first time after thirty years (yeah !) two sounds library records. Title name for each will transport you immediately in the right place: don’t need to move, the space shuttle travel for you ! With 32 tracks in total and with the adequate instrumentation for both albums : « Portes d’Orient » is a stunning meditative ethnic musical trip for guitars, bass, drum, percussions, moog, duduk, flute, guembri, arghoul, woodblock, hurdy gurdy… Overall it reminds the famous Agitation Free first album « Malesch » without the « rock » side but adding the « spiritual » side of Peter Michael Hamel works. « Portes d’Orient » is a very scarce album nowadays and almost impossible to find now in original vinyl LP. « Amazonia » use more synths but also many others ethnics instruments making this one a relaxing and melodic album in a reverie jungle mood. Jean-François Gaël done three trips in the Wayanas tribe in Amazonia and he also worked at that time for the french serie TV « Carnets de l’Aventure » and then brings together all his « amazonia » themes for this album. The patterns are diverses and united, going from Bernard Parmegiani’s electroacoustic side (« Passoula ») to Francis Bebey’s « psychedelic » sanza (« Sanza Sun »), Jorge Reyes’s ambiant ritual (« A Ouanary ») or Steve Roach’s tribal works (« Pakira »)… Two hidden lost gems made in France finally dig up ! Sonorhc go back in time (the space shuttle show you the correct sense of the reading : from the right to the left) and explore the consciousness !

- (1) : « Portes d’Orient » from 1984, is the real third album of the GROUP Sonorhc, and it should be NOT credited only to the duo : « Jean François Gaël - Pierre Buffenoir » (it’s an error) : there were no artists name printed indeed on the original cover album, but the Sonorhc logo appears well on the camel saddle in the drawing made by Jean Pierre Lamerand at that time.

« Amazonia » is a complete unreleased album recorded in 1985, never published before, and again with a front cover made again and at that time (!) by Jean-Pierre Lamerand.