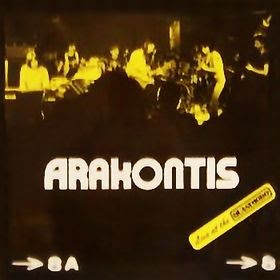 Arakontis – Live at the Quasimodo. 1981 Blackbird.

This live album is a fine Latin fusion with some nice guitar driven melody lines, and a fair amount of electric piano. Not atypical for the time and place, and another good example of the style. Not as fusion oriented as Rozz and less Latin influenced than To Be, but both albums provide guideposts of what you can expect from Arakontis. Arakontis also appear on a 4 group compilation album called "Berlin Fusion" that also features Chameleon, Changes, and Margo

Priority: none
Posted by Purple Peak Records at 8:02 AM