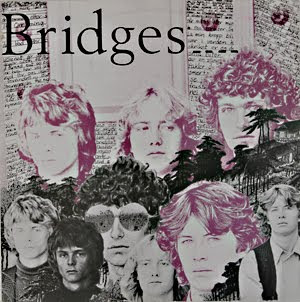 It was about 15 years ago or so, while leafing through an LP rarities catalog, that I first came across this Bridges title. The description basically stated that it was pre A-Ha, but you would never know it by the contents of the music. I didn't believe the catalog. I figured it was hype to get top dollar for an obvious rarity. Probably just another pop rock album that didn't sell well. Well the catalog writer was right and I was wrong. This really is something to pay attention to! And it's also filled with irony. A-ha, to many Americans at least, represents the epitome of mid 80s MTV video driven synth pop (I understand that their albums are deeper than that, but the perception remains). So how can it be that the very embodiment of 1980s slick pop, could put out an album in 1980 that sounds like it was from 1968? See, this Bridges album is heavily influenced by the classic Doors sound, right down to the Morrison baritone vocals. As well, most of the instrumentation is vintage including the Hammond organ. Talk about a change in direction! To me, the Doors are a quintessential American band, where the culture is a big part of the sound. So I do think it's hard to appreciate a band from Norway copying the style, even though it's extremely well done. I suppose it's similar to a band from Los Angeles singing in Italian and trying to replicate classic PFM. Anyway, a fascinating album that would easily find an audience for a CD reissue.

Priority: 3
Posted by Purple Peak Records at 6:38 AM