News: Esoteric to reissue The Dog That Bit People 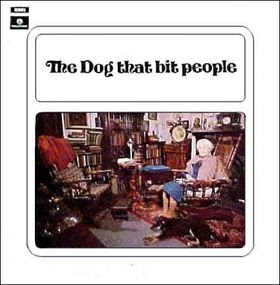 Not long ago we announced Esoteric's October releases. They had mentioned a couple of more in the pipe, and today we learned the super rare The Dog That Bit People is being reissued. There is a prior legit reissue on the obscure Shoestring label, but those are long sold into collections and impossible to find now.

I never did feature this album separately, but it was in the Original List entry. Below is the excerpt:

The Dog That Bit People - s/t (England) 1971 Parlophone. Standard underground UK rock album, not that dissimilar from what you would find on the Dawn, Neon or Transatlantic labels during this era. Features a slightly down home folk feel combined with some nice organ/mellotron and a few good leads. Not overly progressive, but a well produced rock album all the same. Originals are very expensive. Reissued originally by the Shoestring label in 1994.

The always excellent Planet Mellotron website describes the album as such: "When organist Norman Haines left Locomotive to form The Norman Haines Band (subsequently producing the fab Den of Iniquity), bassist Michael Hincks and drummer Bob Lamb added two guitarist/vocalists and formed The Dog That Bit People. Their sole, eponymous album from '71 is the kind of stylistic mish-mash that usually gets labeled 'progressive' these days, despite having next to nothing in common with the brand leaders. OK, I suppose it's 'progressive' compared to the mainstream pop and rock of the day, but it's not a particularly adventurous album, opening badly with the overly gentle Goodbye Country, while halfway decent proto-prog like Cover Me In Roses is followed by the good-time country-rock of Someone, Somewhere. Closer Reptile Man is the most rocking thing here, with its distorted vocal, but it's a case of too little, too late.

Keith Millar plays Mellotron, with a string part towards the end of opener Goodbye Country, more of the same (endearingly out of tune) on Cover Me In Roses and (in tune this time) Walking. Overall, then, The Dog That Bit People isn't a hidden artifact from the era, just a rather ordinary album with a couple of good points, just scraping three stars, with some welcome Mellotron work."

Interesting to note that Esoteric also reissued their own Eclectic release of Locomotive.

It would seem that The Norman Haines Band won't be too far behind. I can only hope so!
Posted by Purple Peak Records at 1:06 PM