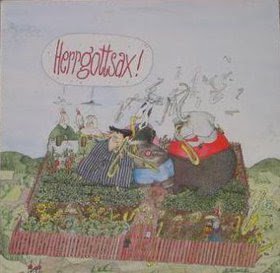 Judging by the cover, the title name, and some of the cartoonish voices, one gets the impression this album was made for children. Maybe John Coltrane's kids, I dunno? Other than the aforementioned voices, this is mainly a superbly crafted Kraut fusion album in the Missus Beastly, Munju and Mosaik style. Large ensemble featuring multiple saxophones, flutes, horns, guitar, bass and drums. The compositions and playing are very tight, and some of the sections will have you raising your head repeatedly in amazement. There's some standard jazz noodling as well - but overall a very pleasant surprise and well worth seeking out. Would make for a nice reissue on GoD. Thanks to fellow Gnosis peer Mike Hargis for the heads up on this title!