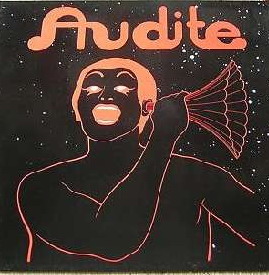 Today we start a new series of obscure early 80s German progressive and fusion albums. We have 5 to report on that have arrived via various sources recently. Today's post is courtesy of Midwest Mike and is probably the rarest and most sought after of the bunch.

Audite is a vocal heavy German language album, with a clear affinity for the classic 70s progressive rock sound. Sophisticated arrangements are apparent, and the electric guitar work in particular is exemplary. Synthesizers and even a little flute propel Audite to interesting status. No getting away from the canned early 80s production though. I was most reminded of Anabis' "Wer Will?" album though Anyone's Daughter "Piktors Verwandlungen" also sprang to mind. A good one for aficionados of the 80s German symphonic sound, though a bit of a slog for those looking for more dynamic instrumental input.

Priority: none
Posted by Purple Peak Records at 7:45 AM