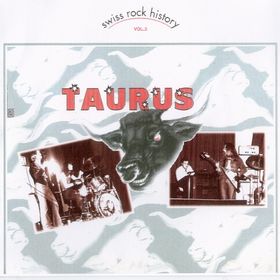 I have lots of albums here to still report on, but due to some extreme time constraints in March and April, it will take me some time to get to them.

In the meantime let's get back to the archives - these are albums that are in the Original CDRWL, but I just haven't featured them separately yet. Most of these are of marginal interest (for me anyway), but given their rarity, I figure some of you will be interested in reading about them. We last left off with Fragua from this series, and we'll now pick back up with Taurus from Switzerland.

This is the 3rd and I believe last entry in the Swiss Rock History series which also includes albums by Lear (excellent proto progressive album and we've featured it already as a Priority want) and Exit (decent rock record and has already been reissued on CD). Taurus' sole work is clearly not ready for prime-time, and could best be described as raw demos. The songs themselves are early sketches of what was to be a full painting. Had they completed what was started here, Taurus' album would have most assuredly gone down as a masterpiece. They clearly had a lot of great ideas, along with some stellar vintage sounds (organ, guitar, etc...). So definitely worth releasing as an archival document for the curious. Perhaps the band could reunite and finish what they started?

Priority: none
Posted by Purple Peak Records at 6:51 AM