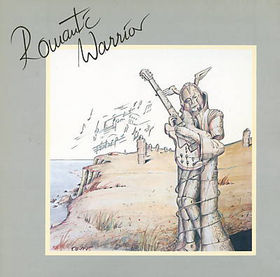 Here's Pt. 2 of our series. This one also courtesy of MM.

Romantic Warrior are no doubt named after the famous Return to Forever album, though this German band doesn't quite possess the vibrancy of Corea's classic bunch. There's the slick-as-a-butter-dish production, with slap bass, happy rhythm guitar and digital drums. However all is not a loss, as the lead guitar work has a slight bite to it, and there's even a little sitar to break up the monotony. If the term "1985 jazz fusion" doesn't have you fleeing for the exits, then definitely give this one a spin. Otherwise run. Run faraway.

Romantic Warrior went on to release two other albums. It appears their 1986 album "Himalya" is also without a CD issue. And 1988's "Planet" was issued as a CD originally.

Priority: none
Posted by Purple Peak Records at 8:24 AM