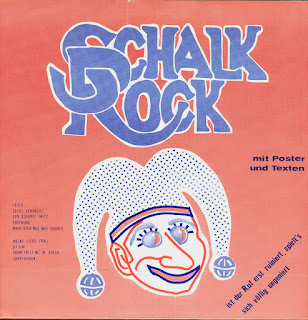 And here's Part 5 and the conclusion of our recent German series. Whereas you may expect to see the cliche "last but not least" phrase, I'm afraid to say this is indeed last.

I had this one on a curiosity list for many years, with not even a hint in finding references to it.  Leave it to the AC to turn this one up on our behalf. He said that this would be a good choice to put up on the CDRWL to serve as a warning. Uh-oh, that's not a good sign. LOL. Of course, the AC was right as usual. It's not terrible or anything, but certainly out of scope for what we're doing here. Schalk Rock is not to be blamed, but rather those that seek to profit from it with dubious descriptions. Though I'm loathe to accuse anyone of ill intent, I'm afraid in this case, there's no other explanation.

Described once in a rare catalog (I won't name names to protect the guilty) as "Early Guru Guru with sax", it comes as no surprise that the entry was mostly hype. Schalk Rock is primarily a straight ahead rock group that employs both guitar, sax and harmonica. Some of the guitar leads feature some cool wah-wah and are definitely the highlights of the album, few as they are. Otherwise, a fairly ordinary German language rock release.

Priority: none
Posted by Purple Peak Records at 9:08 AM