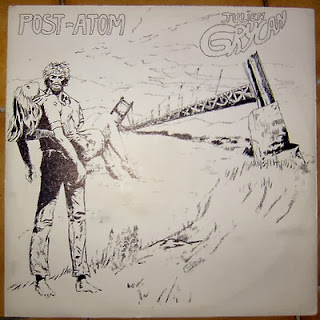 While we await our big announcement (and there may be a delay, as a new development came along late yesterday - we'll see), we were recently contacted by the good folks behind the Strawberry Rain label. They let us know that the very rare Julien Grycan 1980 album "Post-Atom" will be reissued on CD and LP. Ms. Grycan is a new name for me, but SR stated that it would be of interest to the CDRWL. I believe him! Cool stenciled drawing cover, that's for sure. The photo above comes from a former ebay auction, where the description stated: "French acid folk psych on private label Kiosque d'Orphée . with stoned vocals, effects and great guitars and acidy parts. Like 1st Manset , Denis , en ces jours or Beautiful losers..."

As well, SR filled in more detail on the Mar-Vista album we reported on earlier. This sounds better than I had imagined!  He further describes the album as thus: "Side A is influenced by Ash Ra Tempel, Popol Vuh and even Balinese music and is very killer.  It plays as 1 long song, but it's 6 songs blended with sound effects and strangeness.  It's like a bad dream on vinyl with fuzz, lo-fi vocals like Dandelion, keys, strange loud sound effects flying left to right speaker & looping etc...  but it's not experimental, it's song oriented and progressive. Side B is 1 long song made of synths like Klaus Schulze or Tangerine Dream." Sounds great to me!
Posted by Purple Peak Records at 8:09 AM