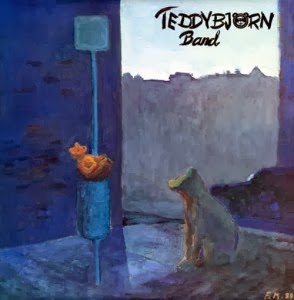 Like yesterday's Touch album, I've had the Teddybjörn Band on a Curiosity list for a long time. From an obscurity standpoint, this album is one of the hardest to find. Other than a reference in the now-gone Progg.se site, I never could gather much info about it. So I was very happy to see it as part of The AC's latest batch of goodies. While listening to the album (and enjoying it immensely), I started on a fresh round of research, and I saw that my friend Progvarius had an LP of it for sale. So I jumped on it! Out of this last batch of rarities, I ended up getting Teddybjörn Band and Sidesteps on vinyl, and just missed out on a copy of Rantz. I'm ultimately a vinyl/CD collector first, so this has definitely been a successful series for me. We're getting very close to our big announcement here. I'm writing this 4 days before its publish date, and I might have one more entry before we get to that one (still on schedule for October 15th). Either way, Teddybjörn Band is a great way to begin closing things out.

So who are the Teddybjörn Band anyway? As odd as it may seem, it's a literal name. That is, we have two main protagonists: One named Ted(dy) and another named Bjorn. And then there's "Band", which is an 11 piece group including vocalists. Put that together and you have Teddybjörn Band - or in more familiar terms perhaps, Teddybear Band.

The AC tells us that "Quality Swedish prog. This band had a Samlas connection, which you can sometimes hear in the music." Yep, and I did recognize instantly from the back cover that drummer Hasse Bruniusson is involved here. Now I'm not the world's foremost RIO / Avant Prog fan (the genre can be paradoxically either overly academic or too cartoonish for my tastes) , but I do find Samla Mammas Manna to be one of the better examples of the sound - mixing traditional Swedish folk music with rock instrumentation. This is a long way from the Northside label's variation of same sound. It definitely has more of that 1970s psychedelic recklessness about it - which is what I find appealing about the music. Now in my mind, there's great Samla ("Familjesprickor") and lousy Samla (För äldre Nybegynnare). As you can surmise by now, Teddybjörn Band is the former and its recording date mirrors close with Samla's masterpiece. I doubt I need to say more here. If what I'm saying above fits into your wheelhouse, you'll love Teddybjörn Band. Not sure if Italy's AltRock plans on getting into the reissue market, but if they do, this album fits their oeuvre perfectly.

Priority: 2
Posted by Purple Peak Records at 6:00 AM

Haha, someone should write an adventure novel about a vinyl record travelling around the world (narrated from the point of view of the record itself, of course). I have bought this very copy of Teddybjorn Band LP in Uppsala, Sweden, about 1.5 years ago. Liked it well enough, but then ended up trading records with Progvarius and he had quite a lot of stuff that I was interested in, so I thought this one can go away because it might be not so hard to find a replacement. And now it ends up in your collection! LOL! That's three Gnosis raters in a row for one humble vinyl LP!

As for the review, it is spot on as usual, and overall that recent run of posts has been really great even if I disagree on some albums. Big fan of Dhope here, and Yucatan, I thought, was a really cool little record. Interesting to see this cover of Circles' "Third Cycle" - I have the LP, but only in a strange promo (?) version, with generic white cover and band stickers on front and back.

Thanks Lev! Your reviews have been great as well. And though our views differ slightly on some of these, I felt your observations were spot on. Did you see I scored an LP of Sideline? I honestly think some of these recordings are coming my way BECAUSE of your pioneering efforts. Keep it up!

Funny about Teddybjorn. Tell you though, it' snot going anywhere for awhile. I quite like it!

I agree, Tom, it's a neat record - they occasionally reach the very Hollmer-ish kind of carnivalesque abandon, which is where my enjoyment gets a huge boost. I figured I might find another copy of this easily, but that now seems a rather hasty assumption! Glad it ended up in your hands - at least I know it's in a good home.

Good catch on Sideline too - I only have a CD-R myself, but wouldn't mind getting an original copy one day. Glad you liked that one - I too thought it's above average when it comes to German fusion albums of the period. Have you heard KJOL's "Take It On"? One more private German jazz-rock / fusion LP that is well above the norm, I thought. I think the entire album can be heard on YouTube, and the record itself isn't expensive at all (yet!). Check it out if you haven't!

I have not heard KJOL before. Thanks for the tip, Lev! I'll definitely check it out.