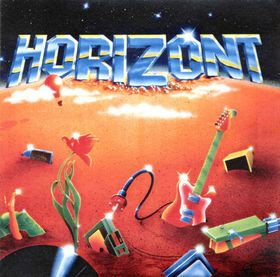 Interesting album that gives a head fake early, before revealing what they are truly about. For most of Side 1, Horizont play a mix of straight ahead rock (with Swedish vocals) - but with a directness that wouldn't be out of place in 1981 - and more thoughtful progressive rock instrumentals. Side 2 turns on their progressive influences, especially the Hammond and guitar work, and is quite good. It would seem that the band needed to compromise a bit to get released on CBS. This is a borderline Priority 3 release. They have a second album that I haven't heard, though presumably it's even more commercially oriented.

Interesting to note that while browsing the CD booklet of the Atlas "Bla Vardag" album, APM had announced their intention to release a Horizont archival album. That indicates to me that the best material was never released during the day, and the album above was indeed a compromise. Of course, that's pure speculation on my part, as APM's CD never did see the light of day. Does anyone have a copy of this?

Priority: none
Posted by Purple Peak Records at 7:16 AM