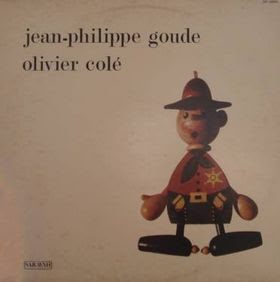 Keyboardist Goude is a recognizable name to many progressive rock fans for his participation with that most bombastic of Zeuhl groups - Weidorje. Prior to that project, he had teamed with percussionist Olivier Cole and released this one highly inventive keyboard / drums duo album. Rather than a series of organ/drum overload tracks, Goude focuses on moodier Rhodes and acoustic piano pieces, and utilizes his one synthesizer sound for his aggressive solos. There's a slight electronic music aesthetic applied throughout. A nice record, that has slipped under the radar. After Weidorje, Goude released the more overt Zeuhlish "Drones" album which Musea fortunately reissued many years ago. From there, Goude began to focus more squarely on incidental music geared for TV and films. I once had "Meli-Melodies" on LP, though it wasn't a cohesive album, like most library albums.

Priority: 3
Posted by Purple Peak Records at 7:36 AM