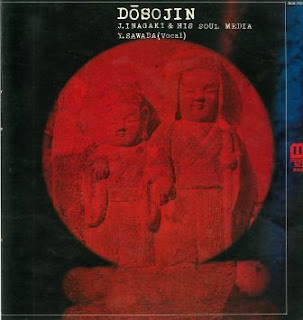 Here are the details from the AC, with his usual fantastic review:

Saxophonist and band leader Jirou Inagaki was a familiar face to Japanese jazz audiences in the 1970s, putting in countless hours as a studio session man, collaborating with most of the other big names on the scene, and fronting his own group, the Soul Media. Their early 70s catalogue is a real mixed bag of serious jazz (including collaborations with luminaries such as Masahiko Satoh and Hiromasa Suzuki), exploitation/covers LPs and a few albums worth of easy-going jazz-funk, such as "Head Rock" and "Woodstock Generation", which unsurprisingly later found favor with the hipster DJ types, leading to easily available CD reissues. However, in the midst of all this they also produced one album that should hold great interest to fans of progressive and psychedelic rock. Would it surprise you to hear that it also just happens to be horrendously rare and virtually unknown? No, I didn't think so. In any case, "Dousojin" (a type of Shinto fertility deity, often depicted on stone statues such as those seen on the album cover) is yet another attempt at fusing traditional Japanese music with "New Rock", in this case an interesting fusion of prog/psych and a uniquely Japanese sort of folk-rock. The songs, arranged by composer Yasuhiro Koyama (who also penned one side of Toshiyuki Miyama's "Tsuchi No Ne", another of Columbia's "Adventure In Sound" albums), are all actually variations and elaborations on traditional Japanese "minyou", old folk songs known to people all across Japan for countless generations. The whole album flows very nicely, running seamlessly from solemn folky songs to fuzz-guitar and piano led progressive pieces and back again, always maintaining a deeply Japanese atmosphere. The musicianship and production are both top-notch, as well. Another of Japan's truly excellent "lost" albums, terribly rare and barely known even in its own homeland. Hopefully a proper CD reissue will rescue this from obscurity someday, as I believe it could have wide appeal to fans of prog/psych, folk-rock, and enthusiasts of Japanese music in general."

Priority: 3
Posted by Purple Peak Records at 7:08 AM