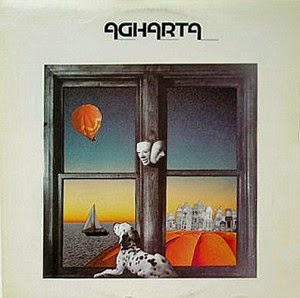 While on the topic of obscure fusion, let's cover off on this one that Midwest Mike sent me years ago. It's been in the main list since then, but I do think it's worthy of its own feature. On reflection, it's a fine album, falling just a smidge onto the other side of the Priority fence.

Agharta's sole album can be summarized as a light and breezy instrumental fusion work with piano and various woodwinds (sax, clarinet, flute). Lead by keyboardist Jacques Mignault (and released on his own label) with the help of other local Quebec jazz musicians, most notably Michael Seguin. Very much a product of its day, with strong overtones of same era Weather Report and Spyro Gyra. The flute, piano, and odd electronic piece give it a warmth perhaps missing in similar type efforts. Well done for the style. Neat cover art.

Quick update: The AC commented that he remembered this one being reissued on CD. And he found a couple of (expensive) copies on Amazon. It appears to have been solely distributed through CD Baby from 2006. And many of those were just CD-R's, so we're not sure if this was factory pressed or not, since it's long gone (and not mentioned on any of the discography sites). So we'll leave the post as is for now.

Priority: none
Posted by Purple Peak Records at 10:36 AM