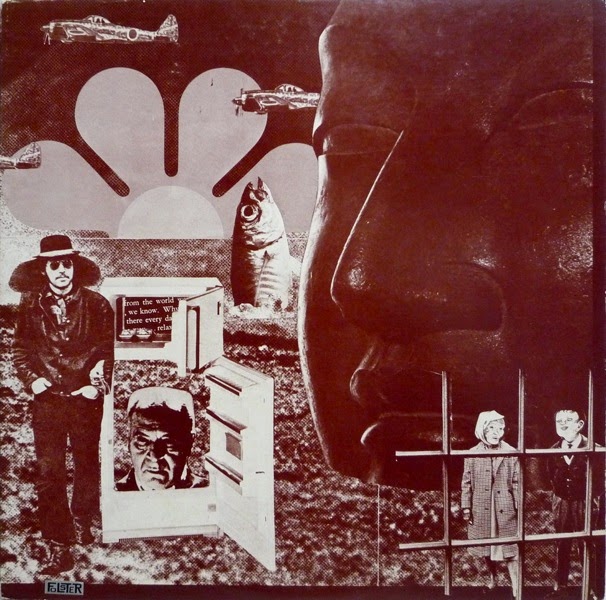 And now we arrive at the serious rarity hinted at a few days ago. I tried every database trick in the book, including image recognition and kanji translations, and could not find one thing about this album. As we know with Japanese albums, it's not uncommon for a name to take hold even if it's entirely incorrect. And the AC always give us the correctly translated version, so I thought maybe I'd find an erroneous entry somewhere. But alas, I did not. So it appears we are introducing the world to this most intriguing album. As stated here on the CDRWL before, Japan is the final frontier for super rare / unknown albums from the original psychedelic and progressive rock time frame. Sure... Germany, England, and our own beloved United States seem to still be harboring some undiscovered gems (Metaphysical Animation perhaps the greatest of them all), but it is in Japan where we continue to find the most unknowns. And where we often find the AC doing his deepest exploration.  Before reading one sentence, I started listening to the album. The first track is heavily influenced by 1968 era Chicago Transit Authority, which is a really good thing in my book. Then there's some random messing about in the studio, with some chamber/classical bits, and in comes a guitar freakout - and once again Terry Kath leaped to straight to mind. What is this anyway? Off to the notes I went...

"This large "group" was actually an amateur musical collective from the exclusive Azabu section of Tokyo who recorded this singular document of avant-psych freakout and then dispersed back into the void. Things get underway with a blast of driving brass rock-esque jazzy psych, before some spacey classical flute leads into a weird piano and percussion motif that repeats over and over, starting again just as you think it's finally done. You can tell that they're just trying to mess with your mind at this point. Soft acoustic folk-psych follows, but is disrupted by a noisy outburst and radio speech that is swallowed up in ominous avant-garde piano dissonance. A brief flute interlude precedes a headlong dive into wild garage psych, morphing into a full-on psychedelic jam with organ and absolutely insane fuzz guitar soloing. Quietly, a rising chorus of birdsongs emerges, backing a return to the gentle acoustic folk guitar and flute heard previously. But then, a strange surge of fluttering electronics heralds a chaotic collage of Japanese phone conversation, backed by a sinister electronic dirge. Clattering percussion rises from this seething mass, heralding an onslaught of pounding rhythms, droning horns and destructive psych guitar, with wisps of strange noise and moaning in the raging storm. Abruptly, the haunting acoustic folk psych and flute cut in, ending the chaos in a moment of zen. This is a truly harrowing piece of music, encapsulating the bad acid freakout visions you're glad you never had. Unfortunately, side two can't keep up this kind of all-out delirium, and the group's roots as a large-scale amateur music collective come to the fore, with some strange and inept jazz and folk songs, rambling detuned jazz bass and piano, and even a lengthy late night jazz club jam session. However, a few moments of interest are still lurking within. A couple of somewhat experimental classical piano and flute pieces, and a very Third Ear Band-esque number with percussion, flute and droning strings are the highlights, and the album closes with one final brass rock/orchestral blast with bleeping electronics to come full circle. Privately pressed in micro quantities and still only known to a few hardcore Japanese collectors, this album, while by no means a consistent masterpiece, is still an essential snapshot of authentic psychedelic freakout on the outer fringes of the era's underground scene."

This is one of those albums that really strikes a chord because of the time and place. Truly a group stretching the boundaries of what was known - very much a product of 1971, an era when this mentality was the norm rather than the exception. The highs go really high here, and so the corresponding down time is more tolerable. Because there's some serious payoff action to witness. Always a hallmark of an album worth repeated listens. And, as such, I christen this a: