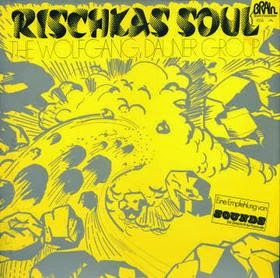 Big news today! The great German reissue label Long Hair is releasing the much wanted Rischkas Soul on CD and LP soon. I was wondering if Dauner would ever get to his (IMO) best title. Now we know he will!

Label says: "For the first time on CD and Vinyl reissue Dauners famous release 'Rischkas Soul'! Recorded in November, 1969 and first released as a so called private pressing the recordings had a second release nearly three years later on famous German label Brain (1016, 1972). Dauner with his strong sidemen Sigi Schwab, guitar and Eberhard Weber, bass and cello with two drummers (Braceful and Wittich) played cool jazz fusion with fluiding organ play from Dauner, sometimes heavy, sometimes dreamy and psychedelic guitar eruptions from master of guitar Sigi Schwab, tuneful and melodic and mostly straight on rhythms. CD and LP come with informative booklet/ insert and liner notes from Wolfgang Dauner himself. A must have!"

And since I have that Brain label LP copy, I'll probably just get the CD this time. But if you don't have the LP, it's worth getting for the gatefold artwork!
Posted by Purple Peak Records at 3:52 PM