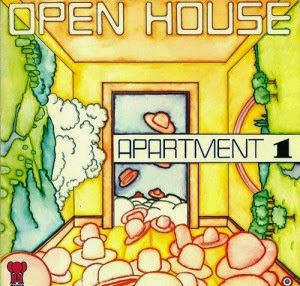 I first came across this title around 1990 or so from a Dutch catalog, circled it, and then never saw it again. Ever. Over time, it became one of my top curiosities. And then about 10 years ago, it was pretty much the top curiosity. Not long after that, I was fed a CD-R copy, and of course disappointment ensued. Just as in my experience at the beginning with this album, I totally forgot about it. Until the CD-R revisit project unearthed it again. There's been an entry on the main list of course, but now we're giving the album its own page.

Apartment 1 (or Apartment One as noted on the label itself) is a straightforward late psych / early hard rock record. Sounds more like what was happening with their fellow countrymen in the 1960s Dutch scene with albums from Cosmic Dealer, The Outsiders, and Q65. Plenty of excellent fuzz guitar and soloing to enjoy here. All on top of some splendid older organ sounds. The opening tracks on each side are instrumental, and represent the best material on the album. The vocals are in machismo English - with a gospel tinge. As such, it reminds me of the vast bone yard of US post psych albums from 1970 on labels like Paramount, ABC, Verve, Rare Earth, and Mercury.

Priority: none
Posted by Purple Peak Records at 7:11 AM

Labels: Apartment One, Priority none