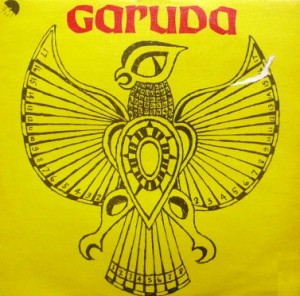 So here's out third submission from He Who Must Not Be Named. Now, he alleges he got this LP directly from his "best bud" Suharto (you know you're an important dude when you only have one name. And you're even more important when you can't name that name...). When did HWMNBN get this album? When he supposedly was supporting the ambassador representing France in the late 1970s. You know, I'm calling bullsh*t right there. But... maybe?

So my first thought here is: Selamat datang di disko

Oh go on, look it up. You know you want to know what it means.

He Who Must Not says this: "There's a great story behind my travels to Indonesia... Composer Tony Campo is from there, Bali in fact.  His bio is featured briefly on the back of the record.  I take it he became a session bassist in the UK and did quite a few library records, often in collaboration with others.  His style is jazz-funk, as befitting the music of Bali which is very dance-oriented.  It's obvious that this album, which is named after the semi-mythical eagle-winged deity that is Indonesia's national symbol, is his masterpiece, the second side is called Suite No. 2 and is his attempt at creating a kind of jazz-funk symphony, you'll see what I mean when you hear it.  Note that the famed Frank Ricotti plays vibes and percussion on this record."

In fact, had their been no second side, then I would wonder why it was sent to me in the first place. I mean, I actually like disco instrumentals, but it's not exactly the purpose of the list. But Side 2, while never quite losing those fat beats, takes on a whole new dimension. There's truly a depth found here that is uncommon in both funk and even in pure jazz. If you want to begin your dig for this album, you better like tight horn charts. With long fuzz guitar solos. And echoed Fender and vibes. I just happen to embrace said concept, hence I rate this: