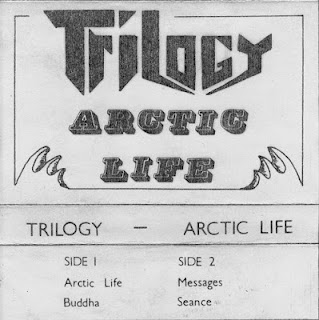 This entry comes courtesy of our friend Head Duster who has an encyclopedic knowledge of the UK Festival scene of the 1980s (and was obviously a regular patron of the events). His website is a goldmine for those of us looking for rare cassettes from that scene. Most of the music falls outside of what we focus on here at the CDRWL (primarily dance/techno/reggae/punk/experimental), but it's a fascinating read all the same. And I make sure to visit the blog monthly. We'll have a full Oroonies feature eventually (I have only a couple of albums up now), and I owe him for most of the material I'll be presenting.

So it's odd that I'm introducing his site via a music group that has nothing to do with the Festival scene. Rather, Trilogy were part of a slightly earlier movement known as the New Wave of British Progressive Rock. As you all know, the CDRWL is a big fan of that genre - perhaps because it was the first one I personally grew up with in regards to progressive music. I was already a veteran of the NWOBHM scene, and that was where I cut my teeth on collecting rare imports as a young high school lad. As I was beginning to learn about 70's progressive music, it was refreshing to know that new bands were emerging in that style. Not only that,  but I did manage to get to London for a week in 1984, which helped solidify my position. So I do tend to be nostalgic about it all.

Trilogy were, as you might suspect, a trio that also happened to feature quite a bit of keyboards. When the keyboards are active, I am reminded indeed of many of the bands from the early 80s period such as Twelfth Night and Pallas. But the guitarist plays a double neck guitar - and you have to know exactly where I'm going here. Correct... Rush. As in "Moving Pictures" Rush. Tightly wound, non-sprawling Rush. And I love it. Rush meets Pendragon? OK  - works for me! Obviously the production quality is lacking, but it's a homemade cassette - what can you possibly expect?

The cassette is a 4 track EP, so of course that alone doesn't warrant a CD. But if they have other studio material, or soundboard live stuff - then it surely would be of interest to many I think. Heck, if Tamarisk can do it, then any other obscurity from that time and place can! Perhaps they could reform for a full effort as well? Why not - they probably haven't been asked to do so in nearly 30 years.