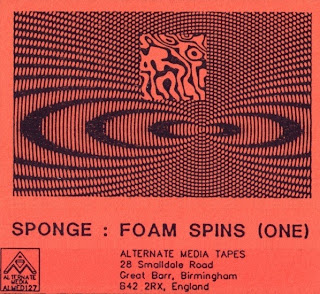 Let's get back to the AC's rarities' pile here. He tees this one up as follows: "Scottish space-rock band. This was recorded live in Edinburgh throughout 1987. They spend a lot of time messing around with free-form spacey electronics, but when they finally get around to kicking out the jams, they do muster up a pretty intense Hawkwind-meets-Ash Ra Tempel type of sound. Released a bunch of hopelessly obscure cassettes in the late 80s, but this is the only one I've heard. Sound quality isn't great, but I suppose that's to be expected. Yet another interesting piece to the forgotten UK festival/space-rock puzzle".

Ultima Thule, the long standing mail order shop, and publishers of the excellent Audion Magazine, adds this review for Discogs: "Sponge were amongst a family of bands/musicians from Edinburgh in the late 1980's. They played a brand of space-rock that stepped on from classic Hawkwind, especially so on this tape of live improv/jams, fleshed-out with copious amounts of synths/electronics. Strangely many of their releases were cassette only on the Birmingham Alternate Media Tapes or American Audiophile Tapes, and thus they are extremely rare nowadays. The only problem with this tape is the cruddy quality, someone did something seriously wrong with the mix, although the music is brilliant, if you tweak your bass and treble controls!"

And perhaps the oddest aspect of all is that they have at least 6 albums all released between 1988 and 1989 (?!), and this supposedly is the last one. So from an obscurity perspective, Sponge would have to be considered in the same league as Rancid Poultry, another band that the AC helped fill the CDRWL's collection on, and we covered at length a couple of years ago. How a group could be so prolific,and yet completely unknown until now, is definitely a mystery. But the UK Festival scene certainly produced a lot of interesting material out of its primordial stew. It's like discovering entirely new organisms out of the Amazon rain forests. As we mentioned in an earlier post, Head Duster continues to educate us about some of the truly rare bands from the scene. Our good friend Spacefreak also saw many of these bands back then, and has provided valuable information to us regarding the scene. Perhaps they knew Sponge?

There's over an hour of improvised space rock on here, and like most of these type of live outings, the album itself could have used a good edit. It's like having to eat spoonfuls of the spinach, broccoli, carrots, peas, potatoes, rice, beans all before actually getting to the meat. As mentioned by both gentlemen above, the sound quality is of bootleg standard.  I'd say Sponge relates closest to AMA, another long form improvisational space rock band - though AMA didn't possess synthesizers or  saxophone. And I'm also reminded of the Milwaukee collective F/i, at their most loose and reckless jam mode. If you're a fan of space rock, this is one you'll want to hear. When they get "in the zone", there's some pretty good ripping going on here. But it's not really anything that needs to be pressed on CD.

Priority: none
Posted by Purple Peak Records at 6:00 AM