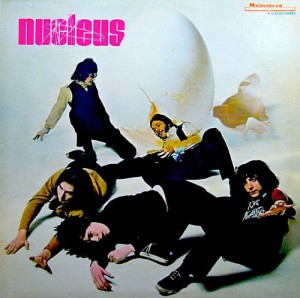 Compared to the current sea of rarities we're sailing through, Nucleus' sole album is as common as "Frampton Comes Alive". And this is not an album that was "fed" to me over the past year, but rather came from an old dusty box of tapes I was going through in the Spring. Most of these tapes have either already found their way to the CDRWL, or in most cases, have actually been reissued already. But Nucleus completely fell through the cracks. In fact, I don't remember having ever heard this album, nor do I have it graded anywhere. Well... my bad then.

I'll be the first to admit I'm not the world's biggest "psych" fan. I absolutely adore psychedelic influences in my progressive rock, but actual psych rock tends to be too straight for me in most instances, and rarely lives up to the genre name. But when an album is truly psychedelic in both sound, and composition, then I take notice. Nucleus is that album. In fact, at times it's a bit too disjointed to get into. It's really a strange phenomena they have going here. They seem to be jamming, but in odd time signatures ---- for each member. Perhaps it's pure incompetence, and no one band member can keep up with the other. Maybe. But I doubt it. It sounds intentional to me. It's downright disorienting at times. Which, almost by definition, is psychedelic. There's some incredible Hammond organ and acid guitar on here, with all sorts of screamed, distant, and... well... melodic vocals. Damn, this album is just flat out cool honestly.

Naturally enough, since Nucleus is not super rare, the album currently is suffering through pirate hell. Hopefully some merciful label will provide it a nice home with liner notes from the artists and/or bonus tracks. I actually think this one would do well in the reissue market (I'm buying!). Sundazed, Sunbeam, or Lion should try for this one. Nucleus later became A Foot in Coldwater, which actually had a fairly successful rock n' roll career in Canada on the Daffodil label. This an album where a reissue seems realistic. Anyone?

Priority: 2
Posted by Purple Peak Records at 6:00 AM

Don't know if you are still looking,but it is available on cd,and on i-tunes Canada at least.

There are about 3 different editions on CD - and unfortunately they are all pirates. We're only looking for legitimate reissues. Sony bought Mainstream many years ago, and have the rights all locked up, and haven't shown any interest in releasing any of the albums sadly. It's a tragedy, and that's why the bootlegs proliferate.

But we keep hoping!