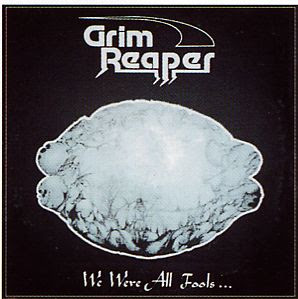 Brutkasten is sort of Germany's DIY label, similar to France's FLVM, England's multitude of 99 only releases, and America's 1970s tax dodge loophole labels (Guiness, Dellwood). There was no consistency to what was on Brutkasten, and one can find anything from acid folk rock (Carol of Harvest), Genesis inspired symphonic (Sirius), basement hard rock (Black Spirit, P205) and onto German pop and schlager music. Grim Reaper fits the mold perfectly. The music is sort of an American inspired hard rock, but with some old sounding organs recalling other German bands like Air or Erlkoenig. The production is pure amateur basement. Not a whole lot to latch onto here, except there are some nice melodic guitar leads that seem to imply that Grim Reaper did at least possess some talent, if not a lot of imagination. There's some nice Moog work here and there as well.

Priority: none
Posted by Purple Peak Records at 7:19 AM