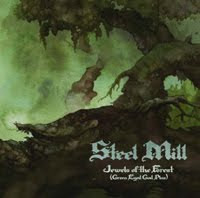 Nice to see Lee Dorrian's Rise Above label back in the reissue game. They got off to a great start in 2006, but have since been silent until now.

I don't have Steel Mill in the CDRWL, along with many other British albums that received the CD treatment in the 1990s. The debate is long on what is legit or not, and I'm not getting into any legal arguments, because I don't have all the data. I'll only note the known and accepted boots (for example, Diabolus, Aquila, Hannibal, etc...). But there was a circle of labels starting with Repertoire, and leading to TRC, Green Tree - and later Akarma - that reissued scores of albums in the most basic format as possible. So legality aside, higher quality reissues are needed for many of these albums. It should be noted that later, for their part, Repertoire started to put out much better quality reissues with liner notes and bonus tracks (their initial Brain releases were particularly good).

But as with Long Hair's Nosferatu reissue, if I see an album that is now getting the royal treatment, I'm going to call it out. Esoteric has generally been at the forefront of this quality movement, though they typically are dealing with the bigger names (and we've been noting their more obscure albums here).

So, back to Steel Mill. Rise Above's reissue has been renamed (perhaps wisely so), and features new artwork. Not sure that was needed, but it does help distinguish the product from a marketing perspective. This looks like an excellent reissue, and it will feature no less than 9 bonus tracks. On a music level, I think Steel Mill is a fine example of the UK early 70s progressive hard rock sound, known in many circles as proto-prog - a fave genre of yours truly.

Incidentally, I own the Japanese mini on the Airmail label. Airmail's MO is to just put fancy packing on already existing CDs. So while I do like the pretty (as they say), and will most likely keep it, I absolutely plan on buying the Rise Above version to supplement.

Jewels of the Forest (Green eyed God plus)

"Steel Mill are one of the most enigmatic bands from the original British progressive rock boom of the early 70s.Despite scoring a continental hit with their highly acclaimed 1971 debut single Green Eyed God, it took four years before their record company gave the cult classic full-length album of the same title a UK release in 1975. Having been released in Germany in 1972, it still remains a mystery why it took so long to come out in their home country. Of course, by 1975 the band had long since vanished and the music scene had changed dramatically. Nowadays Green Eyed God is a major rarity, having been bootlegged endlessly and has fetched in excess of £1,200 for a mint UK copy. For years, collectors and experts of the period alike, have been perplexed by the lack of knowledge and information regarding this fantastic band. Finally the story is told with this detailed release, containing in-depth sleeves notes, many unseen photographs and a plethora of never heard before tracks."

Release date set for November.
Posted by Purple Peak Records at 7:04 AM

This saw a legit reissue from Essex Records years ago. Taken from original master tapes and mastered by George "Porky" Peckham.

Thanks Ken. I'll guess that most of the subsequent reissues were based on this master. However, it looks like the Rise Above release will feature considerably more material then the Essex one (which had 2 bonus tracks). Not sure if the bonus tracks will be worth it, but I'm sure to find out.