Famous Actors from Out of Town, USA 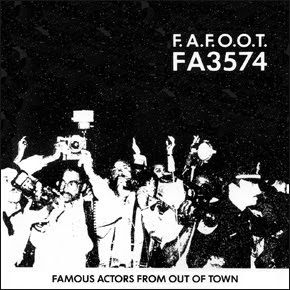 And while on the theme of 1980s era avant progressive US groups, might as well throw in Richmond, Virginia's Famous Actors from Out of Town.

Famous Actors from Out of Town is a self-described "improvo-instrumental" group. Exactly the kind of album you'd expect to find on the nearby Cuneiform label. As with any such venture, there are bits that should have been edited out, but there are also plenty of inspired moments as well. Some fine guitar work with tricky and complicated rhythms. I was pleasantly surprised by the quality of this album.

Description below provided by the Free Music Archive - and you can hear the album there as well.

Comprised of former members of the Orthotonics, Idio-Savant, the Tom & Marty Band, House of Freaks, Sparklehorse, Cracker and Gutterball, FAFOOT made ambitiously composed and arranged instrumental music built on two of the city's best drummers working intricately in tandem.

"FA3457" (sic) was a limited-edition, cassette-only release and in 2009 Chris Bopst of the syndicated "Bopst Show" said: "For years I have been looking to secure a digital copy of the cassette tape made by the late, great Richmond instrumental band, The Famous Actors From Out of Town (FAFOOT). I had long ago lost my tape of the group’s one and only release and wanted to get it back into my collection. I contacted one of the group’s drummers, Pippin Barnett and asked him if he had an extra copy of it lying around somewhere. Within 10 minutes of my request, the Art Blakey of Richmond percussion wrote back saying he had a burned CD copy he could give me and after a few more exchanges, he dropped off the CD at one of my places of employment. It was as good as I remembered it. The four-man group consisting of Marty McCavitt on keyboards, Paul Watson on guitar, trumpet & bass and Pippin and Johnny Hott on drums were amazing live and the recording captures their weirdo, late 70’s/early 80’s art, rock, jazz, noise sound pretty well. The 23-year old recording sounds as vibrant today as it did back then."

Labels: Famous Actors from Out of Town, Priority none