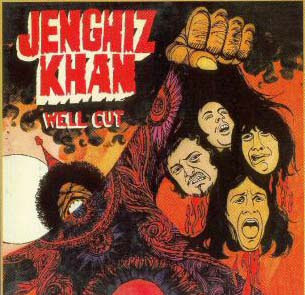 It was in the late 1980's that I first began to trade with dealers from around the world. And Jenghiz Khan was one of the first albums I traded for, and it cost me some rare gems (at least for what I had to offer at the time). "A psychedelic progressive masterpiece from Belgium." I don't think I could have been more disappointed. In fact, I thought it was terrible and I'd just been taken to the cleaners. An early lesson for me in "dealer hype". See my definition of hype in the Passenger (UK) entry. Anyway, looking back on it, I can see where Jenghiz Khan would be popular with a certain fan base. So no way would I call it hype today. And it's aged a bit better for me, but no chance would I froth about it either.

There are at least 3 bootlegs of this album. So the demand is there.