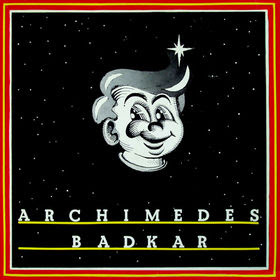 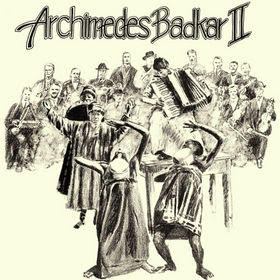 Here's a band I figured would already have their albums out on CD. I admit to procrastinating a bit on this entry for that reason. MNW is still around, and every once in awhile they'll toss out a CD reissue bone to keep the dogs from barking too loud. Archimedes Badkar's third album, the overtly titled "Tre", was reissued a few years back. For me, it's the weakest of the three albums (but still good), though I know many folks disagree with my assessment.

For their first album, Archimedes Badkar could be considered an alternative to Kebnekaise. Whereas the latter mixed Swedish folk with blues and psych rock, Archimedes Badkar took the folk music through the jazz rock blender. It's a fascinating fusion, and the ethnic components are out front, so they're quite serious about it. The cover of Big Boy in space reminds me of the first Austin Powers movie. I doubt they had Big Boy's in Sweden in 1974, so a bizarre sight indeed. Comes with a cool multi-page newspaper of lyrics and a postcard! There is a bootleg CD of this title.

On the double LP second album, Archimedes Badkar moves from Swedish folk to that of India and Tibet (though the homeland still is featured). Here the jazz and rock components are toned down a bit. But with two albums to stretch over, the band has plenty of time to explore the various different creative avenues they set out for themselves. Archimedes Badkar were four years ahead of Embryo's landmark double LP "Embryo's Reise" for this kind of European jazz fusion east-west sound. The second LP of the set goes for broke and the listener will experience a more experimental sound with hit and miss results.

Priority: 2 (for the debut)
Posted by Purple Peak Records at 5:00 AM

Do you know if the Southside label reissue on digipack CD of the first album is legal?

do you know if the digipack of southside label is legal or what??