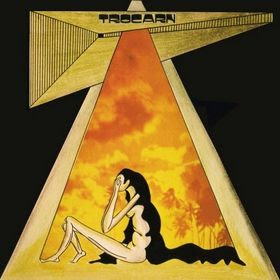 One of our readers suggested I give this one a closer spin, and so I did (a good suggestion I might add!).

Trocarn play in that charming, but hopelessly low budget, maudlin, French progressive folk genre. Epic but somewhat confused. Towards the end of the album, we're presented with a loud burst of fuzz guitar, coupled with the freaky fast complex changes. It appears the band possessed tons of pent-up anger and went nuts at the end. More of that interspersed throughout would have made for a monster album. One has to think there is more of that sound in a canister somewhere. From the French section of Suisse. File next to Emeraude, Subversion and Alpha Centauri. I also have to think a newly remastered CD taken from the masters could do wonders for an album like this, and maybe take some of the "low budget" aspects off of it.

Thanks Tom for this feature. Amazing how some bands come up with a follow up some 30 years later :)
Trocarn released II in 2007

Hi Strawbsfan - Yep! I did know they had a second album, but I haven't heard it. What's your opinion of it?

Hi Tom,
I quite like it. Half the album is them re-visiting the key songs from the first album (Le Naif, Jonathan, Le Paysan...). The album is definitely more polished as they actualized the sound and expanded the instrumental parts which makes the songs more adventurous.
The album gained in production values but lost some of it's innocence and freshness.
I will rip the CD tonight and email you a link :)
Take care
Phil

Hello again,
That Trocarn chat made me think of another Swiss band I did not find on your list...Kashmir
They have apparently 3 albums although I only have 2. Their first and most common is Je Suis from 1979 (Didier Lasfarguette) which was re-released in the rest of Europe as Alarme (Kiswell) is in the late 70's Prog-Electronic style the second I have is Histoire Cruelle 1982 (Kobold) is more Prog less Instrumental/Electronic and also quite interesting. The other one is apparently called Les Reflets Du Lac but I have never seen/heard it.
I can send you links if you are interested and think they fit
Thanks again for reading me.
Take care
Phil

Thanks Phil for the comments!

Also, thanks for the reminder on Kashmir. I used to have Alarme. It's been years since I sold it, but my recollection is that it was similar to other electronic duo's like Eden (France), Jonathan (Germany) and maybe even Space Art. I also remember that Histoire Cruelle was pretty scarce and I've since forgotten about them altogether. But you're absolutely right, they should at least be in the main list. So I'll them tonight. Let's offline this, as I have an update for you on the first Espaces. ;-)