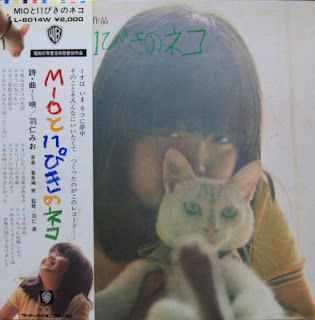 Now here's an odd bird! Mio Hani is a 7 year old girl who pretty much recites non-stop throughout the whole album about her 11 cats - in Japanese of course. So it's basically a children's record... BUT... with the psychedelic band Far Out providing the background music. I won't lie to you, this one's a tough listen. However I think plenty of folks out there will be interested in this one, especially some of the darker fuzz laden moments towards the end of the album.

As usual, The Alaskan Connection writes a far better review and detail (not to mention providing the music itself!):

"Mio Hani was a young girl whose father was film director Susumu Hani, known mostly for his French-style New Wave films of the 1960s. In the early 70s, he apparently decided to give his little girl a star turn, casting her in the leading role of his latest film, "Yousei No Uta" (known simply as "Mio" in the west), a Japanese/Italian/French co-production (you can actually watch the whole thing on Youtube, just search for "Mio Hani"). Undeterred by its relative lack of success, he pressed on, conceiving an integrated media tie-in which included a children's book full of Mio's photographs and poems, as well as this unusual children's record of the same name. The whole concept behind this thing seems to be her obsession with cats and the strange fantasy dream-world that she inhabits with them. Anyway, her father decided to charge Osamu Kitajima with the job of providing musical backing for Mio's silly little songs/poems and odd ramblings, who naturally brought along his buddy Fumio Miyashita and the rest of the nascent Far Out (who had already released a single and appeared on the "Rock Age Concert" compilation and were just about to record their debut LP) to help him out. The end result is a concept album of sorts, although full comprehension will obviously be lost on those who don't speak Japanese (I can say that the lyrics are often quite amusing, for what it's worth). Musically, the best way to describe this is as a children's folk-rock album, although that doesn't really do it justice. It flows quite nicely through a variety of moods, and there are lots of neat little psychedelic touches going on in the background, if you listen closely. Occasionally (primarily on side two), the whole band gets brought in for a bit of Far Out-style psych/prog jamming, although that only lasts for a few minutes in total. Overall, it's probably closer to the Fumio & Osamu "Shinchuugoku" LP that was released around the same time than Far Out, but I honestly like this one a lot more. Maybe my brain was warped from watching too much of Carole and Paula's "The Magic Garden" as a young child back then, but I find the whole "psychedelic 70s kids show" atmosphere highly appealing. Comes in a really nice gatefold with an illustrated booklet."

And our friend Isabel copied this review from Tilapia Records of Japan into RYM:

"Mio Hani & Osamu Kitajima with Fumio Miyashita, SAYU EIICHI, ISHIKAWA KEI and ARAI MINAMI (basically Far Out backing up): “Mio To 11 Piki no Neko” (Warner – L-8014W) Hideously rare and impossible to get Japanese psychedelic masterpiece by ex-Far Out and Far East Family Band main man assisting a 7 year old kid on his trip through the love and death of 11 beloved cats. Basically this by Osamu Kitajima produced album was completely backed up by the band Far Out, who did not record their eponymous album until the following year in 1973 but their slowly acidic drenched lysergic jamming is already present on this monster album, only to fully explode when the second side rolls in and which they would perfect for their sole album the following year. The whole affair starts off with a distinct Far Out vibe backing up this young kid singing and talking about her cats. So basically this is a children’s disc where the musicians are tripped out lysergic gunslingers and although it may be deceptively innocent at beginning to dive into this album, it slowly grows darker and darker and acidic intoned. Mio starts singing off in an upbeat, playful and joyous style, interrupted by instrumental breaks where she lovingly raps away about her beloved cats. The scenery is almost folky but with some stoned laidback vibes shimmering throughout. The mood is light, upbeat and optimistic but as soon as side a draws to a close and side b begins the whole affair gets darker and darker as one of the cats gets sick and eventually dies, sucking you into a distorted perceptive and hallucinational vortex of slow bubbling paranoid dementia. And on that moment the true lysergic downer jam-infested riffage of the backing band comes shining through, revealing the true identity of the hired, longhaired acidic gunslingers that are Far Out in the making. Just a splendid record that till this day is still undetected by non-Japanese psychedelic music lovers. The reason for this is that it is a hideously rare album and that it basically always got rightly labeled as a children’s album but no one bothered to point out the lysergic nature of this gem. Largely unknown, but mind-blowingly great, this is one of my all-time treasured and favorite Japanese children/ psychedelic/ hybrid records of all time. Just never shows up on these shores since the album sold so depressingly badly upon its release that only a handful copies remain in circulation. Still affordable at a cheap price until a larger crowd will get air of it and push it through the roof. Just a massive disc and possibly the one to pick up out of this list. Filled with great acid deranged guitar licks and that will please everyone who is into Far Out and Far East Family Band discs. Simply a MUST!!!!! Price: 600 Euro"

Priority: none
Posted by Purple Peak Records at 7:12 AM