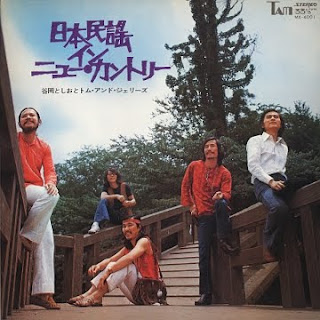 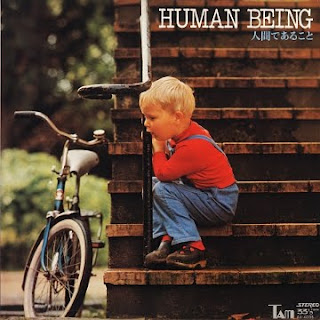 Here are a couple more major Japanese rarities sent in by the Alaskan Connection. This is stuff you can't find listed anywhere (including Rate Your Music). The 70s Japanese underground continues to reveal mysterious recordings not heard of prior. We're in 1600's era exploration mode for the modern age.

I'll admit that many of these albums are difficult to absorb at first. Similar to how we were first able to listen to Zeuhl or Krautrock or Canterbury. At some point all of us into experimental music made a leap from normal convention. To illustrate what I mean, perhaps I should use a food reference. It should come as no surprise that I'm also very much into exploring restaurants as well as trying new beers. One thing you notice over the years is tolerance for different flavors and styles. In effect, you train your palate to be able to distinguish the various ingredients and tastes. I feel the same about music. One has to train their ear palate as it were.

For this particular brand of Japanese rock music, my ear palate is untrained. I have a particular aversion to anything "country", and yet I found both of these albums fascinating. Tanioka has a smooth voice, almost like Marty Robbins (my Old Man had a pretty large C&W collection, so I do have some background knowledge of the genre). As well, harmonica is an instrumental that usually has me coiling in despair, and yet here it has a gratifying Spaghetti Western scene setting mood about it. There's also plenty of loose underground rock sections as well, so this isn't something out of scope.

The Alaskan Connection, on the other hand, has an advanced ear palate for this genre. So that's one reason (of many) on why I copy in his reviews- especially for those that are right there with him. So take it away AC!

Toshio Tanioka is a violinist who made the rounds as a studio session-man in the early 70s Japanese rock scene, even scoring a playing credit on Yosui Inoue's "Koori no Sekai", probably the biggest selling Japanese pop/rock album of the entire decade. Soon afterward, he struck out on his own as the leader of the group Tom & Jerrys. Initially conceived as something of a country-rock band (American country music having a surprisingly large following in Japan), what they ultimately came up with bore scant resemblance to that style. You'll notice from the title of their first LP that, much like the Jirou Inagaki "Dousojin" album which I recently covered, this is another attempt at fusing traditional Japanese "minyou" folk songs with the emerging New Rock movement (or in this case "New Country", confirming their self image as a country-rock band). However, far from standard Japanese folk styles and even farther from any kind of country music you might have heard, the concoction they brewed up here is an exquisite mixture of deep, earthy Japanese folk-rock and languid jazzy psych that is nothing short of extraordinary. There's an incredible emotional depth to this work, something that's very hard to put into words. Each note is perfectly placed, seemingly filled with a deeper meaning related to the whole. The songs are compact and precise, with no wasted or excessive effort, but still fluid and expansive, filled with fascinating small details and nimble musical diversions. Kazuo Mizobuchi's vocals are incredibly beautiful, calm and reflective but filled with melancholy. All of these elements weave together to create an elevated, almost sacred atmosphere that seems to emanate from the very soul of old Japan. A haunting masterpiece which words fail to adequately describe.

Now, how does a group of mere mortals follow up such a transcendent work of art, merely a year later? Well, there's no way they really can, but "Human Being" is still a wonderful album in its own right. Leaving the traditional adaptations behind and concentrating on their own compositions, they created a fully realized concept album using the passing of seasons as an analogy for growing up and aging. A more light-hearted folk-rock sound predominates, and at times their country-rock roots finally come to the fore. But the musical imagination, impeccable performances, and focus on creating a unified whole all make this much, much more appealing than that description might imply. A subtle undercurrent of psychedelia is still present, and the many interesting sound effects and sonic colors evoke a palpable atmosphere, creating a sort of received nostalgia for a childhood spent in the rural Japan of an era long since passed. Aside from these albums, the group also appeared on the soundtrack of the film "Nippon Sanjuushi", which resulted in a single featuring a couple more original songs.

These LPs were both released on the Tam label, a subsidiary of the famous Toho film studios. Japanese prog fans might recognize this as the same label that also released the excellent Yasuo Inada and Bemi Family LP, but that minor classic is practically growing on trees compared to the mind-numbing level of rarity we're dealing with here. Even in Japan, these incredible albums are almost completely unknown. I sincerely hope that this lamentable situation will be rectified by a full reissue campaign at some point in the future. But until that time, Toshio Tanioka & Tom & Jerrys will remain one of Japan's greatest buried musical treasures.

Serious rarities for sure. And we've covered the Yasuo Inada and Bemi Family here on the CDWRL prior.

Posted by Purple Peak Records at 7:47 AM

Hi,Tom.
Thank you very much for showing the rare ones.
I found one song from this album on Youtube.
http://www.youtube.com/watch?v=Sj4HAnrapnY

Happy New Year and good to hear from you!

Thanks so much for the Youtube video. I probably would not have found it!