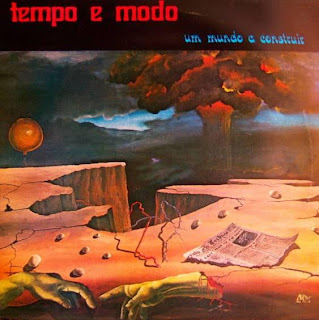 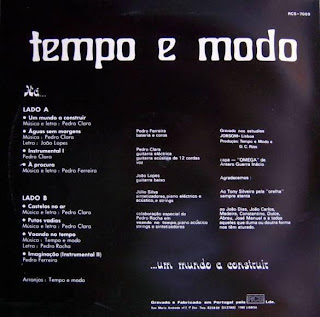 This one comes courtesy of our friend Isabel at Prog Not Frog. I'd never even heard of this album, and one look at the cover had me intrigued. Given that they are of Portuguese origin and supposedly from 1980, I had presumed the album would be a symphonic fusion along the lines of Tantra and Ananga Ranga (which would have been great as well). But that's not really the case at all. Primarily it's a mixture of instrumental symphonic progressive rock combined with a distinct new wave element, that tilts the album towards the neo-prog camp. This latter style, as I've noted in prior posts, was quite a good genre in its early stages, and Tempo e Modo are an excellent example of it. Think early 80s IQ / Pendragon / Twelfth Night. The instrumental tracks are the highlight here, with a strong melodic content coupled with excellent guitar and keyboard runs. A very nice surprise. This is the kind of album Musea used to release in their prime. I keep hoping, perhaps naively so, that they will dip back into the reissue market.

The date commonly affixed to the album is 1980, but as noted in the YouTube video below, I also see 1983. And that does seem more like the logical date. Isabel also posted the back cover, but it doesn't indicate when it was recorded. Pure speculation on my part, but it sure does have that early 80s New Wave of British Progressive Rock thing going on.

The YouTube below gives you an idea of their "neo prog" sound. And to consider the instrumentals are even better, Tempo e Modo is a real nice find!

Oh, and be sure to read the comments from Dom. Excellent info- thanks!

Posted by Purple Peak Records at 6:20 AM

I learned about this album among vynil collectors because speaks a dealer in Lisbon which will contain a reasonable number acquireds.Not sold because it will still want to explore the uniqueness.
It seems that this album was never distributed

The story goes thus:
There was in fact a collector / dealer who bought Pedro Clara, teacher of musical education at Riachos and one of the musicians on the album (vocals, guitar), most of the discs that he had ... Reportedly, the teacher, unaware of the value of the disc, sold lots of records for a pittance, as having no value ...

MODO e TEMPO in english means something like MODE and TIME.
Mode is indicated: expresses certainty, accuracy of the speaker before the fact.
The verb indicates a process located in time. We can distinguish: present, past and future.
Then mix up words and melodies, engineered to songs because there were ... A WORLD TO BUILD(Um Mundo a Construir).

2 more information that may be useful:
1 - the uploader of that video Youtube in this post is Pedro, one of the band members (Pedro Rocha (piano acústico, strings e sintetizadores));
2 - Antonio (http://www.golden-pavilion.com/ owner), has this album