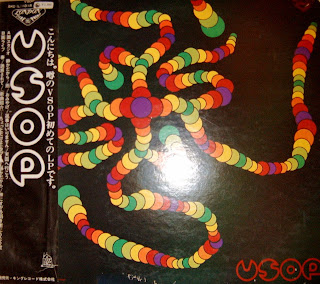 Ahhhh, finally a band from Japan that doesn't require me to type a book as the title! :-)

Here's the last of the Japanese rarities sent in by The Alaskan Connection, though we have a few more non-Japanese albums to cover, including one that's a total mindblower! For me anyway...

VSOP are a fairly typical early 70s blend of blues rock and various other styles. Side 1 is a pedestrian "trail mix" of genres, whereas Side 2 has a nice raw, grungy underground feel about it (and it's a live concert recording). This latter element recalls the Argentinian blues psych scene such as Pappo's Blues or Cuero.

Fortunately for us, The AC has provided a much more insightful review:

"London/King Record (Pop Shop): SKD (L) 1018, 1973, JapanSide 1:1 - Shizuka da kara2 - Ame3 - Omiyage4 - Henji wa Irimasen5 - Tengoku e IkouSide 2: (Recorded Live 3/31/73)1 - Haru2 - Yuuwaku sarete3 - Shinkyokushoukai: - Chotto dake yo (Taboo) - Shizuka da kara4 - Kami ni Sugaru Yowaki Mono ni Utau UtaHard rock/heavy psych rarity by this largely unknown unit. Led by guitarist/vocalist Kazumi Mukai, they manage to kick up a pretty good racket here. The first side is a regular studio recording and runs the gamut from blazing guitar-led heavy rock to psych ballads, standard blues rock, etc, and features some fine songwriting throughout. The action really picks up on side two, a live concert recording from early '73. Long, jamming tracks filled with blistering heavy fuzz guitar soloing that will peel the paint off your walls if played at the proper volume. A very good album in this style, and should be a lot more well-known. Cool cover art, too. They also released an even more obscure second LP in 1975 called "Epilogue", which I haven't heard but apparently saw them heading in a less interesting pop-rock direction, as well as a few singles."

And like The AC, I love albums that peel the paint off the wall! Would be interesting to know if they had some archival material from this era.

Posted by Purple Peak Records at 5:45 AM

I'm just adding a comment in case any lurking reissue labels looking for their next release don't think nobody's interested in this one! I'm very eager to hear this record, and have been for years.
Chris