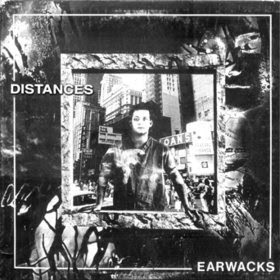 As promised in the Eardance review about 10 days ago (my, how the time flies), I finally found the Earwacks album after digging around for awhile.

We frequently speak of the late 1970s Midwest progressive rock sound on the CDRWL, and the St. Louis based Earwacks would seem an obvious candidate. But it's really not. There's no bid for AOR airplay here. This is truly private press land - an oddball album that is more 1960s in spirit and early-1970s in sound. The shelf date for this kind of music had expired a full ten years before its release. I could see this as a pointed retro album from the late 90s or 2000's, but have absolutely no idea where the inspiration came from in 1981? A scattered mixture of pop, rock (and both styles decidedly non-1980s sounding) and epic progressive rock (with mellotron, flute, sax and fuzz guitar).

Not too many albums with mellotron that you won't find on the Planet Mellotron site, but here's one. BTW, a copy just sold for all of $11 and change back in February (I wasn't looking for it, but I should have been!). Way too obscure this one.

Based on a comment from ProgCzar, I visited their website, where apparently you can get this on CD. Many times when a band does this, they mean an on-demand CD-R, but sometimes it really is a pressed CD. Anyone know?

Oh man, I love this one! Felt a few RIO moves here and there. Years ago I just "had to have one" and actually just googled up the group to score an original LP from the source itself, Fo Jammi. I think it was something silly, like $20 postpaid. Looks like they are simply still sitting on copies of the LP and also offer CD as well:

p/s Maybe some of that other stuff in the folio off of the main site fell 'under the radar,' heh-heh..

Indeed, indeed. Thanks as always for the comment PcZ!

Tom,
again thank you for the review!
http://www.youtube.com/watch?v=weZUaPKMTsw
Isabel :o)

Thanks Isabel. Good choices from the album!